Claddagh Records, formed in Ireland in 1959, has gone online, providing a hub for Irish traditional and folk music. 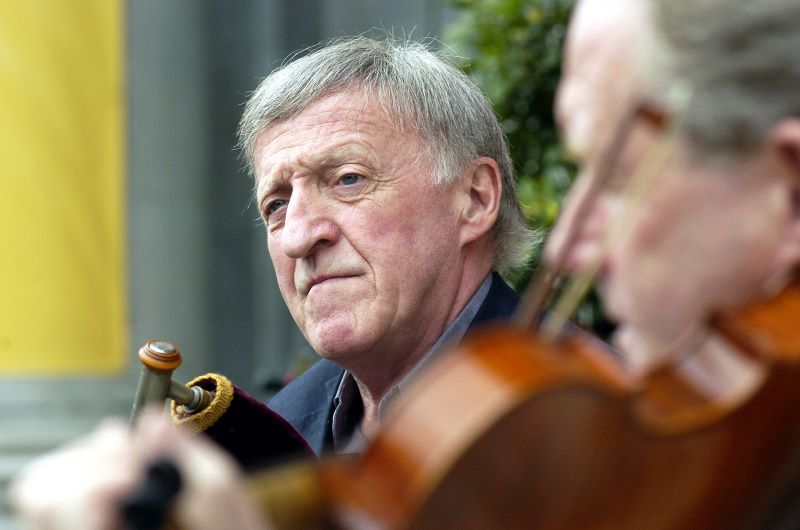 Members of the Chieftains Paddy Moloney and Sean Keane (fiddle) on the steps of the National Concert Hall in 2004.

When we think of the 1960s musically, we think of rock and roll storming through our entertainment world, but it was also halcyon days for folk music in the U.S. Britain, and Ireland.

Traditional Irish music was emerging from its undeserved reputation as “bog music” meant only for the culchie class outside the pale of Dublin. Ironically, there were forces around Dublin that were springing up during that time that would forever change that connotation and take formative steps that have evolved into making traditional Irish music celebrated and revered around the world in the 21st century.

Comhaltas Ceoltoiri Eireann and Na Piobairi Uilleann were two organizations springing up out of the small but seminal Thomas Street gathering place in Dublin who set high standards for the preservation and promotion of the music, rallying musicians around the country where it was ebbing for a variety of factors.

Helping that cause to cross a critical threshold was the pioneering musician, and academic Sean O’Riada, who melded classical music training and regimen into the traditional music realm. He created a performance ensemble of traditional musicians around Dublin called Ceoltoiri Chualann that inspired another group called the Chieftains led by Paddy Moloney, where fireside music was raised to a high art presentation suitable for more formal stages and settings.

Throughout history, artists have always depended on wealthy patrons to enable their craft, and traditional Irish music was no different going back to the days of Turlough O’Carolan.

Such a man in Dublin Society was Garech Browne, whose Guinness family lineage and fortune allowed him to play such a role. His personal affinity with O’Riada and Moloney led to the historic founding of Claddagh Records in 1959, one of Ireland’s most successful record labels.

The patronage of Browne in setting up the company would give prominence and notoriety to folk musicians who were glad to see more serious attention being paid to Ireland’s native musical heritage passed down from generation to generation.

Moloney, a Dublin native who studied the uilleann pipes under the master pipe maker Leo Rowsome, fell under O’Riada’s sway in Ceoltoiri Chualann and formed the Chieftains, bringing Michael Tubridy, Martin Fay, Sean Potts, and Sean Keane along with him. They later added Peadar Mercier as a percussionist/bodhranist rounding out the ensemble.

Browne and Claddagh produced their first CD entitled The Chieftains in 1962 and would for five more albums. In 1968, Moloney took on the role of Claddagh’s managing producer for seven years, churning out 45 albums of music, poetry, and the spoken word as one of Ireland’s most important cultural resources as it was garnering worldwide attention for its rising artistic endeavors.

In 1975, Moloney left Claddagh to devote himself full time along with other founding members (save for Michael Tubridy) of the Chieftains as a professional recording and touring ensemble, adding Matt Molloy, Kevin Conneff, and Derek Bell which turned out very well for them and for Ireland.

Last month, it was announced that Claddagh Records was “reformed” under a new licensing arrangement with the industry giant Universal Music, a music publishing giant like Sony and Warner with revenues reaching $7 billion worldwide.

In a deal like one with Tara Records mentioned in this space in another column, the entire Claddagh back catalog was remastered and re-released and available worldwide via online sales (claddaghrecords.com), and that includes a few classic recordings that will be available on the newly appreciated vinyl disk format.

The Browne family has remained involved since the passing of Garech Browne in March of 2018, making over 60 boxes of original historic and culturally significant recordings that were stored in a Bank of Ireland vault for decades part of the deal.

The potential for recovery and renewed interest here follows a trend line in traditional Irish music and poetry that everything old is new again, with a younger audience joining with a more senior population who still appreciate having a hard disk in their hands to savor sounds that set standards years ago in Irish music.

For instance, the aforementioned Rowsome, a seminal Irish piper, teacher, and pipe maker whose King of the Pipers album was Claddagh’s very first release recorded at Browne’s Lugalla home in Wicklow, will be made available again.

If you are a fan of the Chieftains legendary mastery of the trad world, the online catalog carries the first 10 disks where the titles carried the enumeration (Chieftains 2, Chieftains 3, etc.) where you can follow their professional and artistic progression.

Chieftains 10 marks their first foray outside of Ireland for musical inspiration with a visit to Texas, where their now hardy perennial “Cotton Eye Joe” was first fastened into their repertoire.

The ever-ingenious Moloney discovered a path of cross-fertilization for their music that added further fuel to their fireside music around the world including the Great Wall of China.

That triumphant march from the earliest days of Claddagh will be celebrated in 2022 when the Chieftains and Claddagh will mark 60 years on the trot as Ireland’s foremost traditional music ensemble with a special recording.

There is no question that the recording industry has undergone massive changes in the 62 years that Claddagh Records has been around, and sales in record shops are no longer the primary place to hold hard goods in your hands.

*This column first appeared in the June 9 edition of the Irish Voice newspaper, sister publication to IrishCentral.