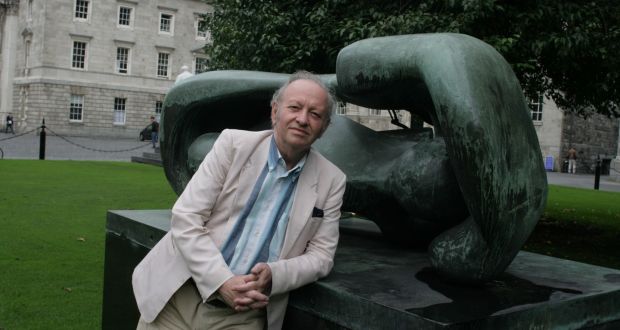 Readers of Derek Mahon’s poems will recognize Jill Schlesinger as the dedicatee of Bird Sanctuary, a poem that Mahon restored to his Collected Poems in 1999

When Derek Mahon received author’s copies of Night-Crossing in September 1968, he inscribed one to his future wife: “Doreen, for the love that’s in it.” The inscription signals a redirection of his affections. The love poems in Night-Crossing had, in fact, been written for someone else.

Readers of Mahon’s poems will recognize Jill Schlesinger as the dedicatee of Bird Sanctuary, a poem that Mahon restored to his Collected Poems in 1999 and to his New Collected Poems in 2011. During the months he and Jill were together, he shared poems with her as they were written, and eleven of these would be published in Night-Crossing, his first collection. Jill is an unnamed presence in the collection as a whole and the direct inspiration for Bird Sanctuary and Preface to a Love Poem (First Love).

Mahon and Jill first met at a party during Hilary term at Trinity College, Dublin, in 1963. He and Michael Longley were sharing a flat in Merrion Square at the time, and Longley has written memorably of their squalid living arrangements and the poetic ambitions they shared. Not mentioned in Longley’s account, however, was the arrival into their domestic life of Jill, an attractive young American woman who was travelling in Europe and had only recently come to Dublin.

When Mahon was sent down for lack of attendance at lectures in the spring of 1963, he and Jill left together for the Isle of Man, a destination with a pun on his own name that seemed as good a reason as any to choose it. He and Jill got summer jobs at the Belle Vue Hotel, a once-grand but at the time, faded Victorian hotel overlooking Port Erin. Jill worked as a waitress that summer, and Mahon was a barman. Particularly memorable was the day he and Jill took a boat to the bird sanctuary on the nearby Calf of Man. When he later memorialized these summer months in Bird Sanctuary, he took up the ornithological theme:

Of these angels of wind,

The sudden whirring of their wings

Disturbs the noon, and midnight rings

With echoes of their island.”

At the end of the holiday season, he and Jill took their summer earnings and went to London where they got a flat in Bayswater (very near where Mahon would later live). In order to rent the flat as a couple, they pretended to be married, and they bought an inexpensive ring for the purpose. Mahon was undecided whether to return to Trinity and finish his studies or whether to find some casual work that would allow him to travel and write. An uncollected poem, An Irishman in London, captures something of his uncertainty. The first-person speaker knows:

Or later I shall have to get up and go,

Inspect the darkness, make a course for home–.”

As soon as he acknowledges that inevitability, however, he rejects it.

“I do not intend

Lurching back seaward to that backward land

Which was mine once, not even one week-end–

Mahon’s dream included a commitment to his own “expected songs” which are linked in his mind with “white birds wheeling over western harbours.”

In November, Mahon sent his poems to Oxford University Press, and he saw Jill sail from Southampton for America. She had grown weary of their impoverished living arrangements, and her parents had been imploring her to return home. As for Mahon, their “six months as man and wife” had scared him, as he made clear when he tried to capture this time in an unpublished poem True Romance:

“I have been incumbent of the fireside chair

And charge-hand at the kitchen sink

Still, it was a painful parting. “I felt like a little boy lost,” he wrote her.

After Jill sailed for America, Mahon stayed on in London for a few weeks, but in the end, returned to Trinity. Terence de Vere White marked his return by publishing his newest poem, In Memory, in The Irish Times:

“I know that fall of hair, this open mouth.

Your features take their place,

Nodding or turning at their shiftless leisure,

In time and space-

But separately. They form no human whole

To which I could put your name-

It was his first poem to be published in this newspaper, and it was an important rite of passage.

Mahon eventually finished his studies at Trinity, and in the autumn of 1965 enrolled in graduate school at the University of Western Ontario. Soon after his arrival in Canada, he wrote Jill at the last address he had of hers.

“I don’t know why I should be writing you after two years,” he began. He was thrilled to receive a letter in return, which arrived on his 24th birthday: “STOP EVERYTHING! STOP THE WORLD, I WANT TO GET ON! SPECIAL NEWS FLASH! I have just received a letter from beyond the tomb – from Miss Jill Schlesinger.”

Writing to Michael Longley, he said, “my immediate reaction is to take a train to Georgia, knock her out, marry her, & carry her off to Inishmore”. He began making plans for a reunion over his winter break, noting it had been “two whole years since the splitting of the atom”.

On New Year’s Day Mahon boarded a bus for the long overnight ride to Atlanta. “We didn’t, of course, fall into each other’s arms in dizzy resolution of two years’ absence,” he wrote Longley; “we came slowly & circumspectly into each other’s arms, exploring possibilities. This will have to be recreated-it will take time.” Then he added, “I would willingly devote my life to making her happy.”

At the end of a week, he was urging Jill to come north with him to Cambridge, where he had friends. He had already decided not to return to graduate school. Eamon Grennan remembers him sitting in the bay window of his Cambridge Street house “meticulously knitting, and sewing, and turning a poem together”. When Mahon mailed Preface to a Love Poem to Jill, he explained it was addressed to her:

“It’s about the impossibility of making a statement in language, the limitations & distortions inherent in the very nature of language, because words are only inadequate symbols for inexpressibly complex concepts. Thus, my saying ‘I love you’ is ‘a form of words’ – a gross, woman’s magazine oversimplification of an extremely complex battery of feelings & responses which can, nonetheless, be rendered only in these words, language being what it is. The distortion is not total – a certain limited perception is achieved, so that while there isn’t a noon-time blaze or a completely shuttered darkness, there is the intermediate stage represented by ‘a blind with sunlight filtering through’. And so on. The words ‘I love you’ urge me to them, & I do.”

Years later, when Mahon republished Preface to a Love Poem in his Collected Poems he disregarded chronology and placed it immediately before Bird Sanctuary which he had written during his and Jill’s summer together two years earlier. There it appears under the title First Love, a revision that passes over other youthful romances and gives primacy to his relationship with Jill.

Despite his entreaties, Jill did not join him in Cambridge, and, as he confided to Longley, “An affaire conducted through Bell Telephone is peculiarly frustrating. I can’t begin to predict the future.” When his visa expired, he returned to Canada, and he marked this new turn in their relationship with a final uncollected poem: What Would You Say If I Were to Tell You, Darling. He sent a copy to Longley, insisting it is “my last, I swear to God my very last poem for Jill”.

Mahon returned home to Northern Ireland in the summer of 1967 without having seen Jill again. That October, Oxford University Press accepted Night-Crossing for publication. Mahon wrote Jill to share the good news, adding the happiest time in his life had been the spring they had shared together in 1963.

Derek and Jill once again began planning a reunion, but just days before they were to meet, Jill wrote to say she had changed her mind and would not be coming to Ireland after all. It was a devastating reversal. Mahon posted two special delivery letters trying to salvage their plans. “Make no hasty decisions,” he urged her in the first; “you could come for a holiday & go back in a couple of months if you feel so inclined”. Jill understood, however, that the visit would signal something more than a holiday. It would also be a commitment to a future together, and, at the very last moment, she could not take that step.

Mahon wrote a brief note about Night-Crossing for the Poetry Book Society Bulletin. In that piece, he admitted to feeling some distance from his own poems, writing that they have already “begun to seem like the work, not of myself but of an old friend, perhaps, who emigrated and from whom I receive only the occasional postcard at longer and longer intervals”. In that inversion, Jill becomes, not merely the inspiration, but the poems’ first and original author.

Stephen Enniss is the Betty Brumbalow director of the Harry Ransom Center and author of After the Titanic: A Life of Derek Mahon. The Poems: (1961-2020) by Derek Mahon has just been published by Gallery Press.